There was no way Woodrow Wilson was going to let former President Theodore Roosevelt anywhere near Europe during the First World War.
Teddy had made multiple requests to War Secretary Newton Baker, asking permission to raise a division of volunteers, with himself as a major general, "to put our flag on the firing line." 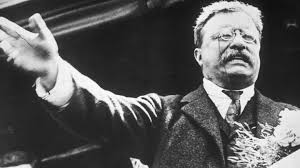 But what Wilson actually feared was that Teddy, upon his arrival in Europe, would be drafted into chairing a peace conference. By 1916 the military situation had reached a stalemate of trench warfare and pointless killing. The Germans had made some initial peace overtures.

If the man who had successfully negotiated an end to the Russo-Japanese War only a decade earlier showed up, the "vital hold which personalities like Roosevelt have on popular imagination," as Georges Clemenceau told Wilson, might just get all the warring parties to the peace table and end the war.

Woodrow Wilson, who lacked Teddy's "vital personality" and international stature, did all he could to keep Teddy home.

If Teddy couldn't fight, he was going to send his four sons in his place.