A message was sent from Paris in the summer of 1918 to American news agencies.

“Watch Sagamore Hill in event of...”

The rest of the message had been deleted by wartime censors, but Theodore Roosevelt knew what it meant.

He said, “Something has happened to one of the boys.” 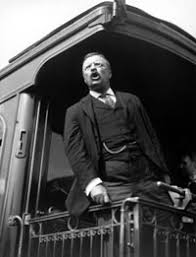 All the Roosevelt sons were fighting in World War I without their dad, who had been prevented from going by Woodrow Wilson. The last thing the president wanted was Theodore Roosevelt back on the world stage before he himself could get there.
Teddy was sidelined by illness and sadness, made worse by the fates of his children. But the possibility of  a return to the White House in 1920 got more realistic as Wilson stumbled.
If only Teddy could make it.
Sources
American Magazine. “The Reformers. Retrieved December 29, 2021 from https://www.americamagazine.org/issue/culture/reformers