It was self-imposed, it was him doing the kinds of things he loved—hunting animals in the wild and being out in nature—and it was as far away from the United States as he could get.

He needed to get away from his successor, to whom he couldn’t help offering advice. About the way the public perceived Taft’s penchant for golf, his midday naps, and the appearance that if he moved at all, it was slow. That he should smile more, and get out among the people instead of cozying up to political cronies. “Lacking aggression, all [Taft] wanted was to be loved…he was everybody’s favorite fat uncle from childhood, dispensing coins and lollipops.”

The day after his decisive election, Taft went to play golf. One of his first statements to reporters as President-elect was, “I really did some great work at sleeping last night.” That quick, it became clear that this would be no energetic, proactive presidential administration.

Even though Teddy had anointed Taft President, he couldn’t trust himself to stick around and watch what happened next.

He went to Africa under contract with the Smithsonian, to analyze flora and fauna, and send back exhibits and write scientific papers.

He was also, being Teddy, going to kill some big, scary animals before they got a chance to kill him.

When the trip was over, he looked around for what to do next.

Presidential Retirement Tip Number Two Hundred Fifty Seven: If you are fighting your impulses and ambition to keep yourself from running for president in an election you are pretty sure you can win, do NOT go on a European tour, where you will be treated like a visiting head of state by adoring crowds and European rulers.

A year after his departure from the White House, Theodore Roosevelt went on a European tour, where he was treated like a visiting head of state by adoring crowds and European rulers.

He saw firsthand the buildup of the German Army and Navy, and the apparent weakness of any European state that might oppose them. At the same time, reports of President Taft's ineptitude showed up in his daily mail.

He came back to New York in 1910, where he was met by a crowd of a million people, who howled "our next President!" at him from the sidewalks along his five mile parade route. One paper wrote that “Never before in the history of America has a private citizen possessed the power which Mr. Roosevelt now holds.”

Teddy went home to Oyster Bay, where he had a lot of thinking to do.

The presidential election of 1912 was approaching, and the next move was his.

On our next episode, we’ll take a break from Teddy Roosevelt’s conflicted musings about a triumphant return to power in 1912 and head to the Civil War siege of Petersburg in 1864. General Grant’s attempt to seize the strategically important city had failed, and both sides settled into a stalemate of trench warfare.

Major General Ambrose Burnside, who had been appointed by President Lincoln to replace George McClellan as commander of the Army of the Potomac two years before, needed to revive his military reputation. He had performed badly at the Battle of Fredericksburg in 1863 and the Overland Campaign of 1864, and was looking for an opportunity to get back into Lincoln and Grant’s good graces.

His solution? He was going to blow some stuff up.

Stay tuned for Fire In The Hole.

The richest man in the world was on the run.
President Theodore Roosevelt’s Justice Department was planning to file an antitrust suit against Rockefeller’s Standard Oil Company in 1906, and the states wanted to get into the action before the Attorney General did. Multiple lawsuits were filed against the directors of the company that controlled over ninety percent of oil production in the United States and had, by prevailing accounts, used unfair practices to gain its monopoly in the market. 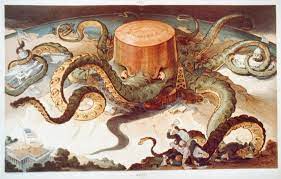 Once the floodgates of lawsuits against Standard Oil opened, the focus landed on the company’s origins and rise to power, which meant the testimony of the company’s founder was essential. And of course, having the richest man in the world dragged into your courtroom was a pretty big deal. Process servers and newsmen engaged in a massive manhunt to find him and serve him with subpoenas.
But a man with multiple estates and an annual income of over fifty million dollars could hide out anywhere. He wouldn't be found until he wanted to be found.
Unless you followed your nose.
On our next episode, we catch up with “The Most Famous Man in The World” as Teddy Roosevelt returns to America after his African safari and world tour to find that President William Howard Taft has made a real mess of things and just maybe, he will have to do something about it.
Stay tuned for Teddy Roosevelt’s Third Term, Part V.

William Howard Taft was a nice guy who didn't really want to be President.

By 1905, it was clear to everyone that Taft would be Theodore Roosevelt’s successor in 1908, and Nellie Taft was already “mentally redecorating the White House.”

Taft was a weak presidential candidate, and Teddy had to do a lot of the heavy lifting. Taft won, and Teddy made plans to leave the country on a year-long African safari. He knew it was best, for many reasons, for him to get out of the United States for a long while.

For many, many good reasons, Theodore Roosevelt went to Africa. 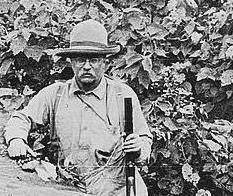 Ultimately, what would have been best for all concerned was for each man to get his heart’s fondest desire: another (and final) term as President for Teddy, after which he could finally lay down his burdens, knowing that he had done all he could. A seat on the highest court in the land for Taft, where his brilliant legal mind could do what it was always meant to do. Forcing these two square pegs into round holes created an off-kilter situation that could only be resolved through disaster.
On our next episode, we take a much-needed break from former President Theodore Roosevelt. As his contemporaries knew all too well, Teddy was exhausting, so we’ll leave him to butcher his way through Africa, slaughtering as many wild beasts as he can and go off on a tangent where Teddy only has a walk-on part, but still looms large. Because he just can’t help himself.

It’s the story of how the escape plan of the richest man in the world was thwarted by his weakness for his favorite food.

Theodore Roosevelt was riding high as the election of 1904 approached.

He had secured the Panama Canal (by helping create the nation of Panama). His only rival for the presidential nomination in 1904 was a sickly Senator. The American people loved his antics, even while establishment politicians feared he was too dangerous a lunatic to be running the country. American children, even though they couldn't vote, pestered their parents to get them a Teddy Bear, created after the President refused to shoot a wounded bear on a hunt in Mississippi. 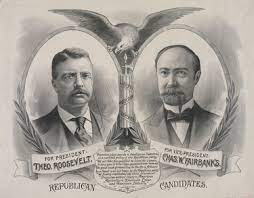 The Democrats nominated Judge Alton B. Parker, a gray, taciturn fellow, to run against him. On the surface, it appeared like the Judge had no chance, but Teddy knew that safe and boring was the only thing that could beat him.

Fortunately, the Democrats made a number of mistakes in the campaign. Their nominee stayed on the sidelines, and when he finally came out to fight, the only arrow in his quiver was a conspiracy theory for which he had no proof.

Theodore Roosevelt was elected in a landslide.

All he had to do now was not put his foot in his mouth in any big way.

On Election Night, without consulting anyone, he made the following statement to the press:

“On the fourth of March next I shall have served three and a half years, and this three and a half years constitutes my first term. The wise custom that limits the President to two terms regards the substance and not the form. Under no circumstances will I be a candidate for or accept another nomination.”

Well, Mr. President, I sure hope that isn’t a statement you’ll regret someday. And I REALLY hope it doesn’t cause you to do something dangerous and self-destructive in the next few years.

On our next episode, we enter the regretful phase of Theodore Roosevelt’s political life as he sits out the election of 1908, grows disenchanted with his appointed presidential successor, and storms the election of 1912 like a bull moose.