The Presidential Act of Succession of 1886 put the Secretary of State third in line for the presidency.

In 1901 the Secretary of State was John Hay, who had been one of Abraham Lincoln’s two young private secretaries during the Civil War. He had known President Lincoln better than nearly anyone, and had watched one of the greatest American presidencies unfold from his front-row seat. He was responsible and stable and a good Republican, with years of public service and an insider’s knowledge of how the White House worked. Interestingly enough, Hay had served three assassinated Presidents – Lincoln, Garfield, and McKinley.

If Teddy Roosevelt’s midnight mad dash down the highest mountain in the Adirondacks to Buffalo upon the death of William McKinley went bad, John Hay would have been the perfect president for all those stodgy machine politicians who thought the young Vice President was a madman.

Now it was a race. 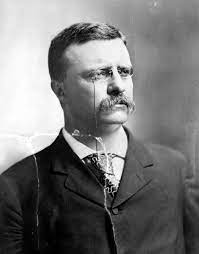 The 400-mile trip to Buffalo, where Teddy was going to be sworn in, was so dangerous that we came pretty close to our history books telling the touching story of how Abraham Lincoln’s right hand man accidentally became President.

But Teddy made it and became America's 26th President. From that moment on what he wanted most was to win the White House in his own right in 1904.

But he had plenty of obstacles in his way.

McKinley's campaign manager and Ohio Senator Mark Hanna (who himself had presidential aspirations for 1904), lamented, "that damned cowboy is president now."

And he began looking for ways to stop him.

Morris, Edmund. “The Rise of Theodore Roosevelt.” The Modern Library, 2001.