Podcast Episode 40 - The Most Dangerous Man In America, Part III

Huey Long had won a seat in the United States Senate while still in office as Louisiana’s governor.
Huey amassed dictatorial control over Louisiana in a very short time. He survived impeachment, neutralized his remaining opponents, and won a Senate seat. He became a driver of hard bargains. “He is always trying to trade us a biscuit for a barrel of flour,” one of his vanquished opponents complained.
While the state and the country was deep in economic trouble, Huey held singular control over state jobs and lucrative contracts. The men who opposed him faced a stark choice: get on board with Huey Long or brace for financial disaster.
Huey’s biggest problem with being the “Kingfish” of Louisiana was that he couldn’t leave the state.
His lieutenant governor, Paul Cyr, kept trying to assume the governorship, taking advantage of any time Huey crossed out of the state. Once Huey won a Senate seat, Cyr figured his claim on the governor's chair was assured.
We'll just have to see about that. 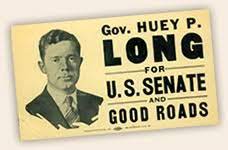