Former President Theodore Roosevelt was in a weird mood.

He had come in second in the presidential election of 1912, which meant he had nothing to do on March 4th of the following year while Woodrow Wilson was being sworn in.

So he went to an art exhibition.

This is probably a good time to mention that he was mostly blind in one eye. 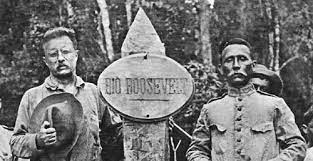 As had become his practice after, shall we say, NOT winning a presidential election, Teddy left the country. He didn’t trust himself to stay quiet while Woodrow Wilson did things he didn’t approve of: removing African-Americans from the federal bureaucracy, passing a pro-business tariff, and developing an isolationist and pacifist foreign policy.


He warned his cousin Franklin to keep the fleet together in case of the war he could see coming, and then went to South America.

Like his African trip in 1909, Teddy’s journey to South America had a number of items on the agenda: scientific study of flora and fauna, the usual slaughter of native beasts for sport, and a way for him to make some money. He told his wife that he “expected to clear $20,000 over the next six months.”

And, like his African trip, Teddy was putting himself firmly in harm’s way. It’s not inconceivable that somewhere in his subconscious was the notion that he might end his life, which now seemed without purpose, in the midst of the kind of action that made him feel most alive.

Theodore Roosevelt did not think he should die in his sleep.

He nearly got his wish on this post-election trip south of the equator.
Check out the episode to find out what happens to Teddy while on the River of Doubt.