The Bay of Pigs invasion was, to coin a phrase, a train wreck.

Fidel Castro had come to power in Cuba in 1959, planting a Communist country right on America’s back porch. Having a Soviet satellite ninety miles away from American soil was, shall we say, troubling.

The Eisenhower Administration approved a CIA plan to train Cuban exiles and provide them with weapons and air support for an invasion of the island. The expectation was that the Cuban people would rise up in rebellion and topple the Castro regime.

The train went off the tracks pretty early. Despite efforts to keep the mission a secret, the invasion plan was widely known among the Cuban community in Miami. Castro’s intelligence service found out about the training camps the CIA had set up in Guatemala, and some of the details of the plans made it into the press.

Fidel Castro was not going to be surprised. 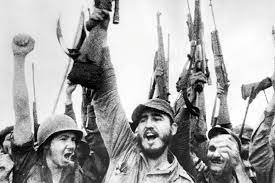 The invasion failed, and Castro took 1200 prisoners. In return, he wanted a bunch of tractors.
This was going to get interesting.
Check out this episode of the History's Trainwrecks Podcast.