Ernest Hemingway didn’t hate his mother, but he said some mean things about her.

He claimed that the money she spent on a summer cottage for herself could have been used to send him to college instead. He once told a friend that if his mother was a bird and flew in a straight line, he wouldn’t hesitate to shoot at her. After his father’s suicide, Hemingway wrote, “My mother is an all time all American bitch and she would make a pack mule shoot himself; let alone poor bloody father.” 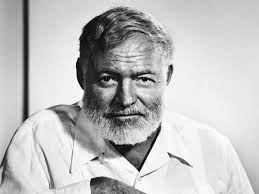 A certain pattern starts to emerge here: Ernest Hemingway was fond of independent, self-assured, career women like his mother.

He also seemed to enjoy getting sued for divorce on grounds of adultery.

Hemingway was a complicated guy. He was off covering the Spanish Civil War as a correspondent (and starting an affair with future third wife Martha Gellhorn) in 1937. The two had met in Key West the year before, and Pauline, knowing her husband like she did—and having a clear sense of history repeating itself, only with her playing the role of jilted spouse this time—suspected what the two of them were up to.

Pauline tore out her husband’s backyard boxing ring and built a massive in-ground swimming pool--24 feet wide and 60 feet long, with a 5-foot shallow end and a 10-foot deep end, all dug by hand through solid coral. There wasn’t enough water to fill it (nearly eighty-one thousand gallons was needed), so it was necessary to drill down to the salt water table to get enough water. It was the only pool within a hundred miles, and cost over $20,000 to build ($365,000 in 2020 dollars).

On a visit home, Hemingway was stunned by the cost overruns involved in pool construction. Pauline was likely unrepentant, suspecting what her philandering husband had been up to. Hemingway took a penny and flung it at her. It bounced off her shoulder and landed in the bottom of the pool.

“Pauline, you’ve spent all but my last penny,” Hemingway told her. “So you might as well have that.”

Pauline had the penny encased in plastic and mounted in the floor of the pool, where visitors to Hemingway’s Key West home can see it to this day.

But the costs kept coming. The pool had to be drained, cleaned, and refilled as often as every three days, using salt water pumps.

Philandering proved quite expensive for Ernest Hemingway: his first wife took the royalties for The Sun Also Rises, and his second wife took a couple years of his writing income to build a pool, then saddled him with the ongoing costs of its maintenance.

He would have been lucky to have gotten out of it for just a penny.
***
Check out the History's Trainwrecks Podcast at the links below:
Itunes:
https://itunes.apple.com/us/podcast/id1566357950?mt=2