Podcast Episode 12 - Fire In The Hole

Major General Ambrose Burnside was going to blow some stuff up. 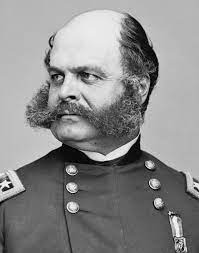 Burnside led troops at the battles of the Wilderness and Spotsylvania Court House in a manner described as “reluctant.” He ended up at the Siege of Petersburg, which was the aftermath of Grant’s failed attempt to defeat Lee in a pitched, decisive battle. Both sides dug trenches and waited. Grant knew his opponent had lost men he could not replace, and supplies were running low. But Lee was clever, and Grant worried that the more time Lee had to strategize, the more likely it was that he might escape.

The battles leading up to the siege were bloody and costly for the North, and Grant was called a “butcher” for his apparent willingness to sacrifice his men in inconclusive battles. General Grant had his own experience at the siege of Vicksburg to draw upon, where he had learned that sieges were expensive and bad for morale.

Like Burnside, Grant needed something big to turn things around.
Colonel Henry Pleasants, a mining engineer from Pennsylvania, hatched a plan where he would dig a long shaft under the Confederate trenches, pack it with gunpowder, and blow the whole thing sky-high. This would open a massive hole in the Southern defenses that troops could pour through and attack.

This sounded great to Burnside. As long as the plan went off without a hitch.

Check out the History's Trainwrecks Podcast at the links below:

On our next episode, we’ll wade in to Ernest Hemingway’s complicated relationships with women and dig in to his views on swimming pool construction.

Not to be cliché, but it all started with his mother.

Wikipedia, “United States Joint Committee on the Conduct of the War.” Retrieved August 30, 2021 from https://en.wikipedia.org/wiki/United_States_Congressional_Joint_Committee_on_the_Conduct_of_the_War