He had won the presidency in 1884 and 1892 (he also won the popular vote in 1888, but the Electoral College went to Benjamin Harrison), making him both the 22nd and 24th President of the United States.

He proved that it was possible to serve a term in the White House, take some time off, and then win again. The Democrats even tried to run him again in 1904, as if serving two terms in a row was for rank amateurs like James Monroe and Ulysses S. Grant.

When confronted by the notion that he couldn’t leave the White House for four years and then come back, Theodore Roosevelt had Grover to point to as an example. So maybe the debacle of the election of 1912 could have all been avoided if Grover had just stayed home after leaving the White House.

Not really. What happened in 1912 was all Teddy. 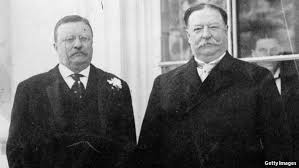 As usual when conflicted, Teddy was capable of enormous damage: “He wanted to destroy Taft because Taft had failed. He wanted Taft to succeed because Taft was an extension of himself. He knew he was no longer President, but he was seen as presidential…Although he was not running, he was running. Even as he maintained his vow of silence, he was shouting from the hustings.”

Doughy old William Howard Taft, instead of seeing his inevitable loss as an opportunity to step aside in return for his coveted Supreme Court seat, picked this moment to show some backbone.

“I fear things are going to become very bitter before long,” the President said. “But…I am going to defeat him in the convention.”

1912 was shaping up to be one rip-roaring year.

Check out this episode on the History's Trainwrecks Podcast or the embedded players below: