The battle for the fate of the Roman Republic was on.

On one side were the empire-builders: Julius Caesar and his right-hand man Marc Antony (and sickly little Octavian in the next tent), Pompey the Great, and Marcus Crassus, who wanted to be great himself but never quite got there.

On the other side were Marcus Tullius Cicero, Rome’s greatest orator, consul in 63 BC, dictator during the Catiline Conspiracy, and all-around clever guy. At his side was Rome’s greatest conservative and champion of ancient ideals, Cato the Younger.

They also had in their corner—at least on paper--the cowardly Roman Senate, but being cowardly--and venal--the Senate was always kind of a moving target. They could be bought and they could be intimidated, and the empire-builders had money and soldiers to burn. 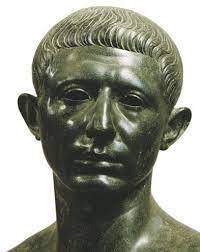 It was a contest between military power, which the Romans had always admired, and republican traditions, which the Romans had always revered. But the citizens of the republic saw their ideals go to the Senate house to die more often than not, and might be willing to take a chance on a smooth operator like Caesar, who claimed to be a staunch defender of the republic even as he quietly dismantled it.

Cicero and Cato had their work cut out for them.
Sources
Beard, Mary. “SPQR.” Profile Books, 2015.

Duncan, Mike. “The Storm Before the Storm:  The Beginning of the End of the Roman Republic.” Public Affairs, 2017.