The dancing girls would take their clothes off, but not while Cato the Younger was in the audience.

It was 55 BC, and the Floral Games were in full…um…bloom. The Games were the culmination of a week-long festival celebrating fertility, with the usual accompanying shenanigans: outrageous dress, lots of drinking, prostitutes being treated like queens, and a troupe of dancing girls in an amphitheatre reminding the spectators of the rites of spring.

A message came down to Cato where he was seated in the crowd. The spectators wanted “to encourage the girls to take off their clothes, but are embarrassed to do so with Cato watching.”

Cato got up from his seat without a word and went for the exit. A chronicler reports that “As he was leaving, the crowd loudly applauded him and then went back to their usual theatrical pleasures.”

The spectators catcalled, the dancers disrobed, “and the Floral Games went on.”

This scene captures the feeling Rome had for the man who was their moral compass. They didn’t want him to see them at their low points, but instead of rising to the high ground that Cato had staked out for himself, they just wanted him to be somewhere else. They were “eager to applaud him for leaving, unwilling to follow him out.”

If we can equate the dismantling of the Republic with some dancing girls stripping to the buff, the same scenario plays out: Rome would embrace empire, shamefully, as long as Cato wasn’t watching them as they did it, reminding them the entire time that they could have done better. 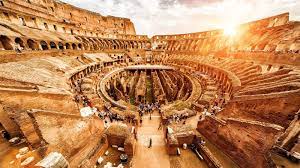 Like trying to keep the clothes on the dancing girls at the Floral Games, Cato’s uprightness and moral authority didn’t last, and the Romans—elite and poor alike—wanted him to leave so they could get back to business as usual.
Business as usual, in this case, meant delivering the Republic into the hands of the three men who would bring it to an end: Caesar, Pompey and Crassus.
Cato’s weakening hold on Rome couldn’t stand against the storm. Forced to choose between bad and worse, the time had come for him to pick a side.
Sources
Beard, Mary. “SPQR.” Profile Books, 2015.
Duncan, Mike. “The Storm Before the Storm: The Beginning of the End of the Roman Republic.” Public Affairs, 2017.
Everitt, Anthony. “Cicero: The Life and Times of Rome’s Greatest Politician.” Random House, 2011.
Goodman, Rob and Soni, Jimmy. “Rome’s Last Citizen: The Life and Legacy of Cato, Mortal Enemy of Caesar.” St. Martin’s Press, 2012.